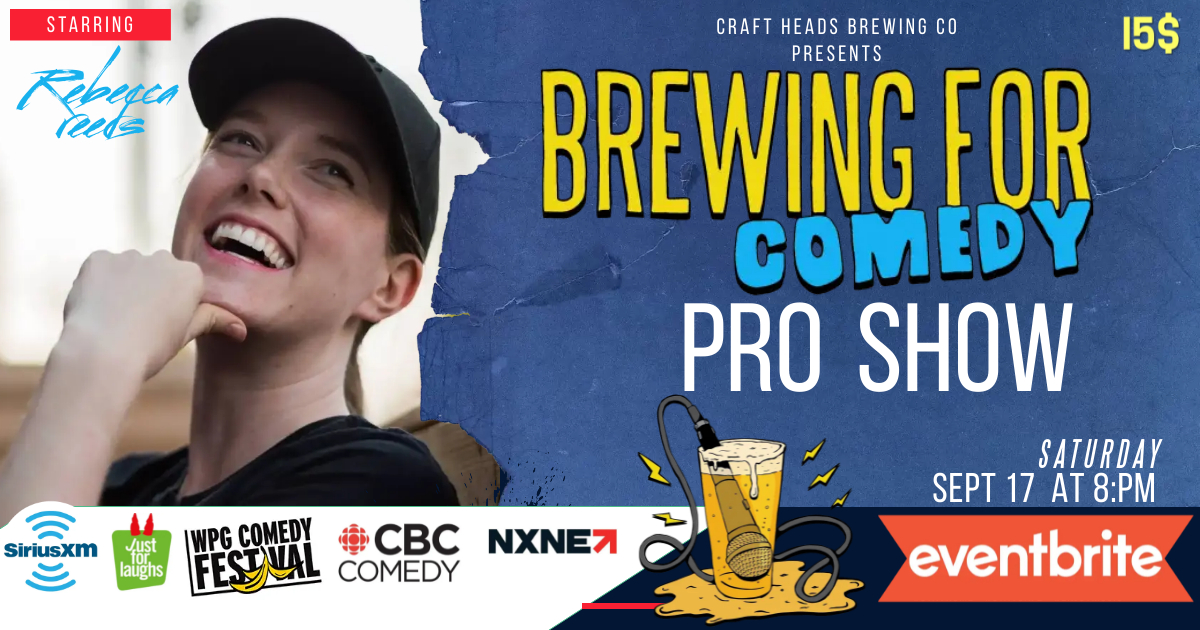 Brewing for Comedy is excited to announce one night only shows with national touring acts sharing the stage with local favourites.
This month we have Rebecca Reeds!

Rebecca Reeds is a stand-up comedian and writer from small-town Ontario. She began performing in Ottawa and has quickly become a comedian to watch out for. She’s performed in the United Kingdom, the United States, and all over Canada. She has opened for several distinguished comedians like Beth Stelling, Jim Norton and Tom Green.
Rebecca has appeared on CBC, SiriusXM, and CBC Comedy where her clip was viewed more than 2 million times. In addition to her appearances on radio and television, Rebecca has performed at several festivals across the country including New Faces Just For Laughs, Toronto’s JFL42, Winnipeg Comedy Festival, NXNE, and the Cottage Country Comedy Festival. In October 2018, The Villain Was Right premiered on the From Superheroes Podcast Network. Along with co-host comedian Craig Fay, Rebecca views movies and TV shows from the villain’s perspective and dares to ask if they were all that bad. The VWR podcast won Outstanding Debut for a Series at the Canadian Podcast Awards.

Brewing For Comedy is a weekly Stand up comedy show tuesdays at Craft Heads Brewing Co. Every week a new ensemble of comedians take the stage, sharing their observations, stories and opinions. The show is balanced between new comedians and ones more experienced, with even a few pro touring acts stopping by. No two shows are the same, but there will always be something to remember. Hosted by Rob Kemeny and Paul Montanier (Windsor Comedy Fest, Thunderbay Comedy Fest, Laughfest, Paul Bunyan Comedy fest, NextBestComic winners) Featuring Tim Reaburn and Scott Gaughan from the DotDotDotwithTimandScott Podcast, Justin Pedick (voted best Local Comedian via detroit Metro Times), Billy Squires and many more!