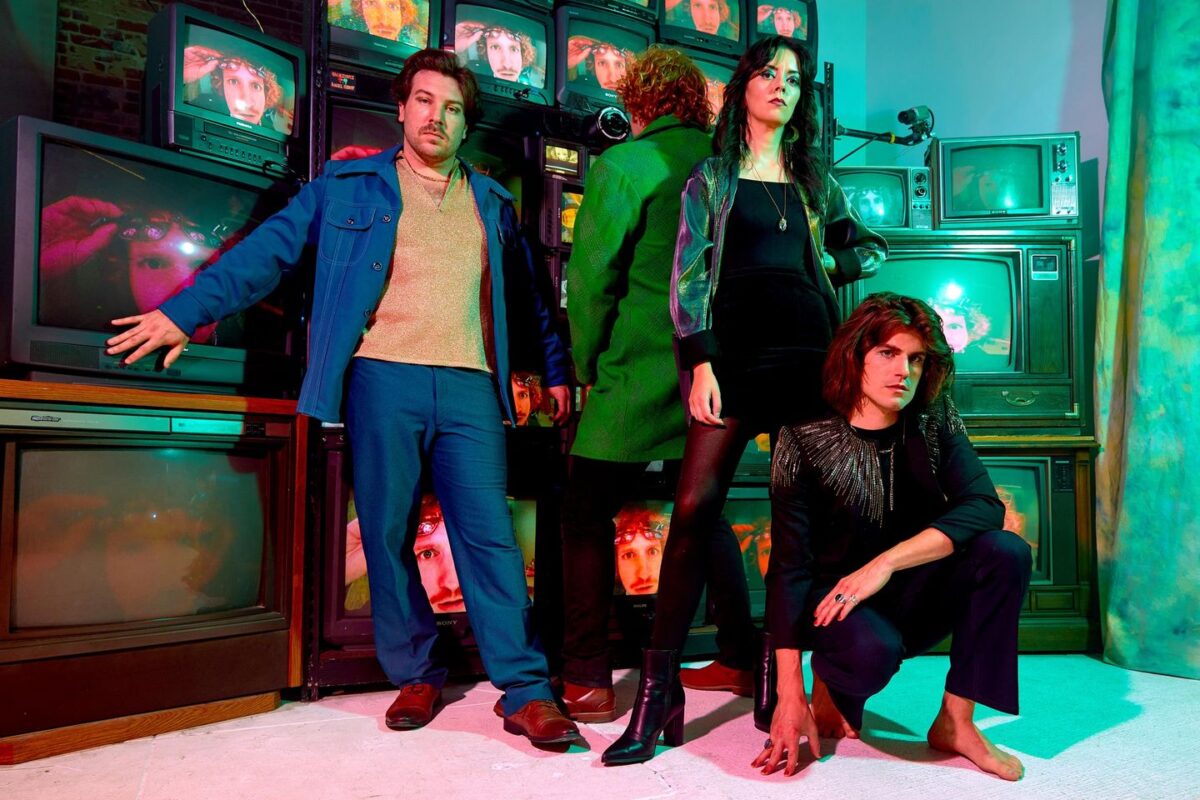 Spaceface (members of The Flaming Lips) / The Sombers at Meteor

Spaceface is a self-described “Retro Futurist Dream Rock” (but you can call them psychedelic-pop) band from Memphis, TN and Los Angeles, CA, active since 2012. Always eavesdropping on the Universe whispering its chaotic will, the groovy bunch harnesses the transcendent pulse of the spacetime continuum into catchy songs that whirl and twirl, bend and stretch, attract and propel. Their unique alloy of dream-pop, funk rock and post-disco, charged by the Sun, ultimately shines way past our collective bedtime, akin to a glow-in-the-dark Slime Science Lab kit.
The project’s founding members include Jake Ingalls (also of The Flaming Lips), Matt Strong, Eric Martin, and Daniel Quinlan, but the lead research team recently enrolled Los Angeles-based musical mind, Katie Pierce from Pierced, with whom sonic experiments continue. Ultimately, Spaceface’s goal is to acknowledge the blurred pain that lurks in the corners of one’s vision on a day-to-day basis while providing a brief escape for anyone who needs or desires it. In light of years of thorough research (or a dream to that effect) that have confirmed music, as an artform, to be a potent medicine for both your mind and your feet, the psych rockers abide.
Over the course of eight years, the collective has toured all over the United States, as well as Canada, with stops at international festivals such as SXSW, Desert Daze, Canadian Music Week, Treefort Music Fest, Hangout Music Festival, God Save The Queen City and Distorsion Psych Fest. Always equipped with a state of the art light-show and/or projectors, sometimes accompanied by weirdish stage props and/or gadgets, the ever-evolving American act provides their dedicated following with thrill-inducing D.I.Y. performances that only get crazier as they perfect their experimental craft.
Since forming, Spaceface has offered timely releases that include a self-titled EP, a full-length album entitled Sun Kids, as well as a small zoo of singles and remixes featuring notable collaborations with artists such as Okey Dokey, Julianna Barwick, Mikaela Davis, Julien Baker, Penny Pitchlynn (Broncho), Phantogram, and Matt Duckworth of The Flaming Lips. The collective is also known for working with notable producers Calvin Lauber of Ardent Studios/Young Avenue Sound in Memphis, TN, and Jarod Evans at Blatch Watch Studios in Norman, Oklahoma, the latter co-producing with Jake, the most recent single addition to the group’s catalog: “Panoramic View”, released in October of 2019.
This latest musical broadcast was the result of Jake and friends spending several months at Blackwatch Studios in 2019, working with Jarod to write and produce new material. The objective remained the same: to offer an innovative interpretation of psychedelic rock, blending transparent ’70s references with striking modern indie and pop-rock elements. After months of test and trial, Spaceface is revving up to release a slew of beautiful musical oddities ranging from dancy indie ballads to modern disco anthems. This collection of postmodern dance floor scorchers promises to be sonic stardust to psych aficionados, what intergalactic transmissions are to stargazers.
After recently working with SixTwelve, an Oklahoma City education non-profit, to assist in the production of a fundraising album with several local OKC musicians, Spaceface came back with a slew of singles, namely “Happens All The Time”, “Earth In Awe” and “Pina Collider”, the latter in collaboration with CERN scientists. The psych outfit are now announcing Anemoia, a second full-length album that should please fans of Beck, Tame Impala and MGMT. The forthcoming LP is scheduled for release on January 28th, 2022 via Montreal-based Mothland. In the meantime, Spaceface offers “Long Time”, a new single featuring Penny Pitchlynn from Labrys and Broncho on vocals, out November 1st, 2021.

The Sombers
Formed in the winter of 2019, The Sombers are a Canadian Synth-pop/R&B trio from Windsor, Ontario. The band is composed of three musicians who are independent musical artists; Aubrey Therrien, Lucas Koksal & Dan St. Amour.