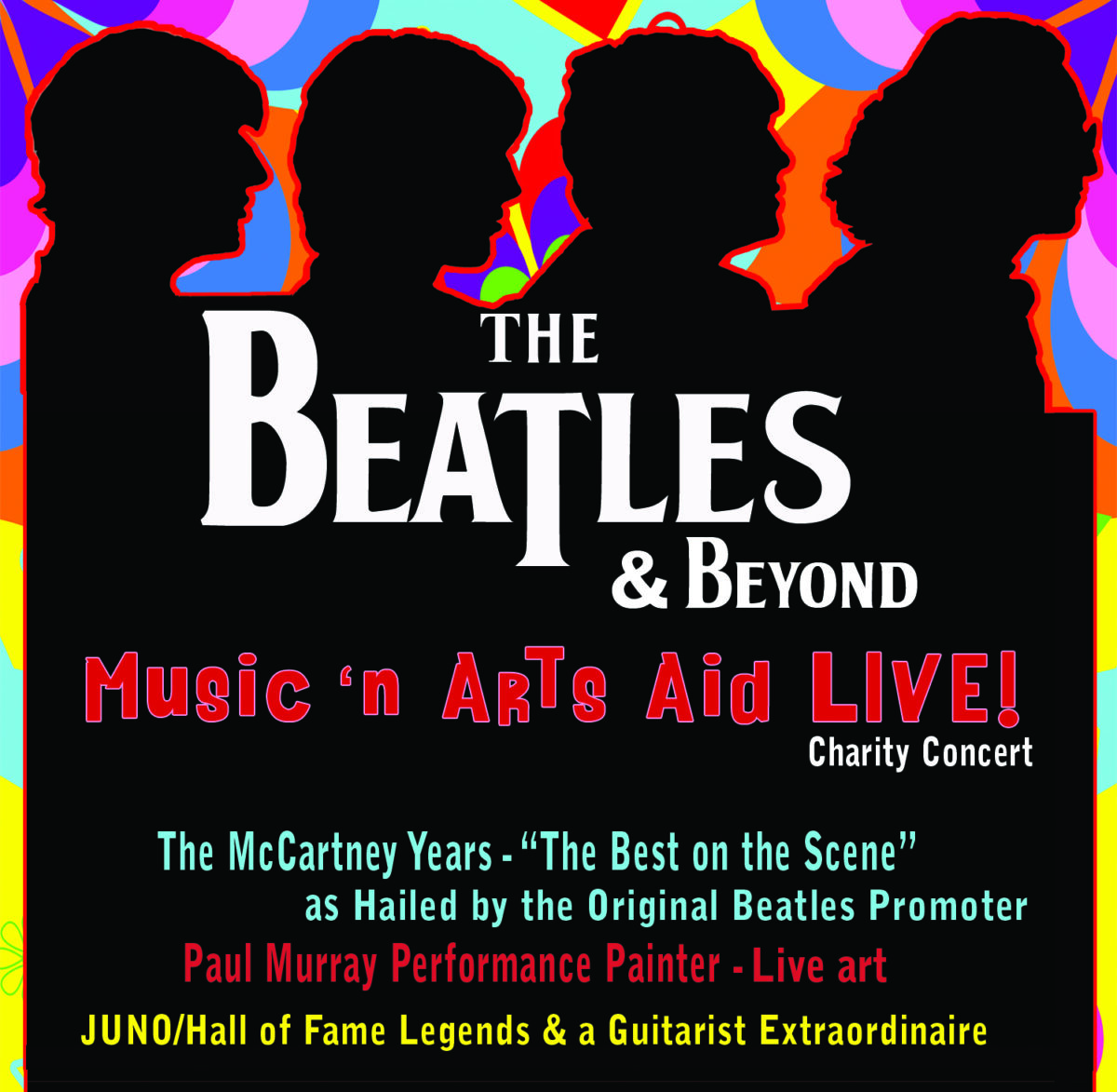 The Beatles & Beyond A Charity Concert 100% proceeds going to Essex County’s professional musicians
& visual artists that have been hit hard by COVIDs restrictions. Supporting area talent so they can continue
defining our unique culture & diverse community.
This show is an exciting & engaging night of never-ending-music of the Beatles and beyond, all highlighted
by our art illusionist. It’s a one-of-a-kind event that all ages will enjoy!
While listening to music of the Fab Four performed by an all-star lineup, watch as Murray mysteriously
appears floating above/behind the band as he creates unbelievable paintings of the Beatles in just
minutes. This unorthodox & chaotic art routine will keep you guessing. It’s an unmatched sensory event.
Paintings are auctioned by texting
Nominate musician/visual artists who deserve a leg up online: WEA-arts.com/Musicnarts
Paul Murray, international artist, historian, philanthropist, performer, A full time self-taught artist since
age 13, his museum art has been sold & celebrated around the globe. His art hangs in museums,
institutions & homes from North America to Europe. Most Murray events have raised funds/donated for
charities & helped raise over $1 million.
“I’ve seen hundreds of shows from around the world and this is as good as any!” JD, Caesars Windsor
“After reading an article on Murray’s art in Pratique des Arts in Paris, France, instantly I was drawn to this
high caliber work. Looking into the eyes of his portraits I feel I’m looking into their soul. I frequent
museums around the world like the MET, the Reich, the Louvre. He’s right up there with the best.”
L. Vanderburg, Holland
Gareth Pearson a Welsh guitar phenomenon Gareth Pearson is considered a virtuoso in the guitar world.
Within a year of taking up the guitar, he was opening for Tommy Emmanuel. He’s earned accolades from
world renowned players.
The McCartney Years is period-true, technically stunning, & explosive live concert show that performs the
music of Paul McCartney spanning two decades from The Beatles to Wings. TMY has entertained
audiences worldwide and even has a personal accolade from former Paul McCartney & Wings Guitarist
Denny Laine. Guaranteed that you will jump out of your seat to clap, sing, and dance.
Local Celebrities: CMAO nominee: Kelsi Mayne & John Drew of Big Wiggle/Higgins Country Music
All-star guests:
Brian Good an 8x’ss Juno’s awarded, Cdn & US Country Music Hall of Fame legend that has toured
with Janis Joplin, The Grateful Dead, & many more, and performed on 41 European tours.
Wendell Ferguson’s One of the nations most respected guitarist who’s toured/worked with top-level
artists, Shania Twain, Gordon Lightfoot & too many to note. Named CCMA’s All-Star Band Guitar Player of
the Year so many times, he retired his name.